My Favorite Free Things To Do on a Disney Cruise 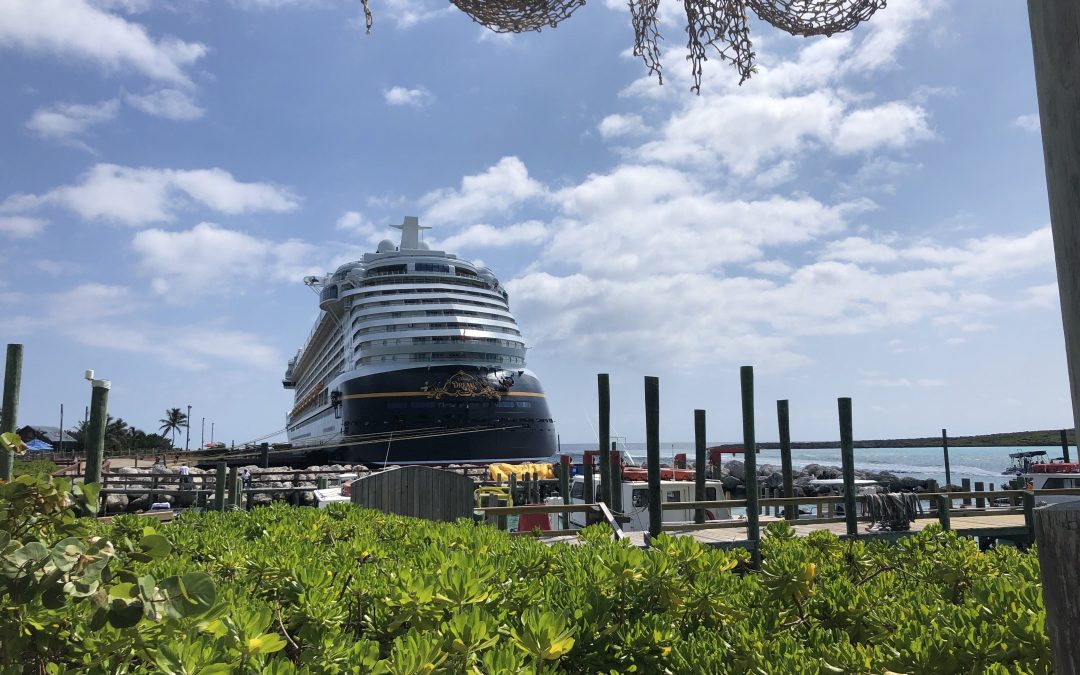 One of the greatest things about Disney Cruise Line is that you don’t need to spend additional money beyond the cost of your cruise to still have an amazing vacation! Here are some of my favorite free things to do when you’re on a Disney Cruise! To find out a schedule of events you can check out the Personal Navigator (there’s an app for that!) daily. You can look on the app and/or on the paper delivered to your stateroom each night. Note: If you don’t get a Navigator delivered but prefer that to the app you can pick one up at Guest Services as well as request delivery.

Almost everyone has seen the amazing towel animals the housekeeping staff makes in your stateroom each night! I have seen monkeys and dogs, and even a swan and a seal. One of the activities offered during the day is an instructional guide on making your own towel animals! This fun family activity is free and believe it or not is not even that difficult! Each guest is given a large and a small towel upon arrival in the venue and we took a spot in the room. One of the housekeeping staff was on stage to teach us, and other members of the housekeeping staff came around to help. It was so much fun! When the hour was over we were given an instructional piece of paper with some of the animals we learned, plus a few more we didn’t have time for. 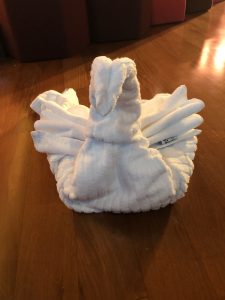 Towel Animal Swan I made myself! 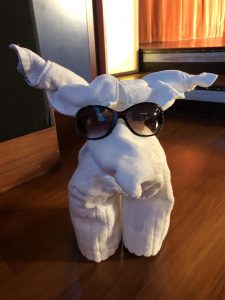 Towel Animal Elephant I made myself!

Disney Cruise Line offers at least one trivia hour per day. Most of it is family friendly, but there are some that are adults only. Some of the options include TV Tunes Trivia, Disney Trivia, Pixar Trivia, and Disney Movie Music Trivia. There are usually about 20 questions and the top prize is a little Mickey Mouse plastic medal. Not worth anything but it’s fun to say you won!
They also host game shows on each cruise such as How Well Do You Know Your Family, Family Fusion, A Pirate’s Life for Me, and The Wheel of Destiny. These are just fun games everyone can play and run around being silly to make great family memories. For adults only there are games akin to The Newlywed Game called “Match Your Mate” and “Dream Quest” which is kind of a scavenger hunt.

I love making crafts! It makes me feel accomplished. Disney Cruise Line has several crafting classes daily such as how to draw characters, folding origami, and 3D Crafts. The 3D Crafts are the most difficult of the bunch as you have to cut out the picture and then glue tiny tabs together after it’s folded. They aren’t that difficult for adults, but kids might get frustrated with the cutting and the folding. Different characters and items are offered several times on the cruise, I’ve made a 3D model of the cruise ship, Minnie Mouse, Olaf, and even the Hatbox Ghost (which I dragged Sara to!) 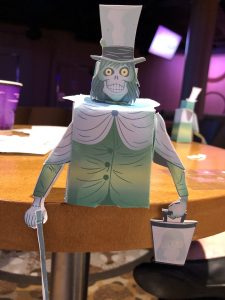 On the Dream and Fantasy ships you can become a detective and solve mysteries which abound on the ships! There are three cases to choose from- The Stolen Art, The Missing Puppies, and The Missing Props (Muppet themed). There are interactive paintings throughout the ship so even when you’re not doing a case it’s fun to watch the paintings move! You can pick up a case file on either deck 5 or deck 2 midship and choose your case. This is fun for all ages though some children under 5 or so might get a little bored. Each case only takes about an hour, but you don’t have to do it all at once, so it’s perfect if you have a few minutes to spare while you’re waiting on dinner or another activity to start.

If you’re a runner or a walker, or just want a fun way to see Disney’s Castaway Cay early in the morning, consider running the 5K on the island! It’s somewhat of a chaotic start as you fill out waivers and check in, but once you get off the ship it’s an easy walk to the start line and you’re off! This race is not timed nor is there a specific pacing requirement, but it is a lot of fun and very easy to do. At the end you get a nice little plastic medal for your hard work! Of course there’s merchandise you can purchase but the race itself is completely free to do. It’s recommended that you sign up at guest services sometime after embarkation. It’s a pretty fun event every time! 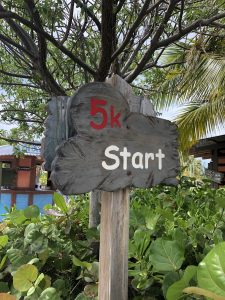 Start and Finish Line for the Castaway Cay 5k 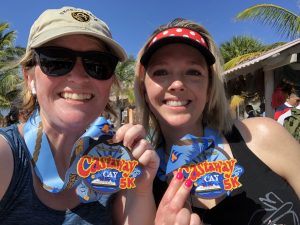 My friend Allison and I after we finished the race

Ok, this one is not free! But the cost is very low compared to many of the other Port Adventures DCL has to offer! You can rent a bike for about $12 an hour. (And I have never seen them charge more than for one hour.) You can rent the bikes at the main bike rental shop near the family beach. You can also rent the bike from Serenity Bay’s bike rental shop! And return to either one! It’s pretty simple to grab a bike and go! There are lots of places on Castaway Cay to ride that it’s harder to get to on foot so it’s a really neat way to visit the island. 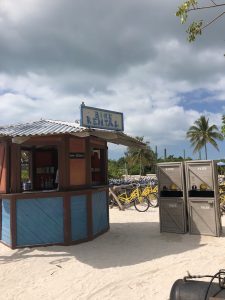 These are some of my favorite free things you can find on a Disney Cruise – but there are countless others! I love exploring the ships and some of the great things on Castaway Cay too! If you have a favorite please let me know in the comments! 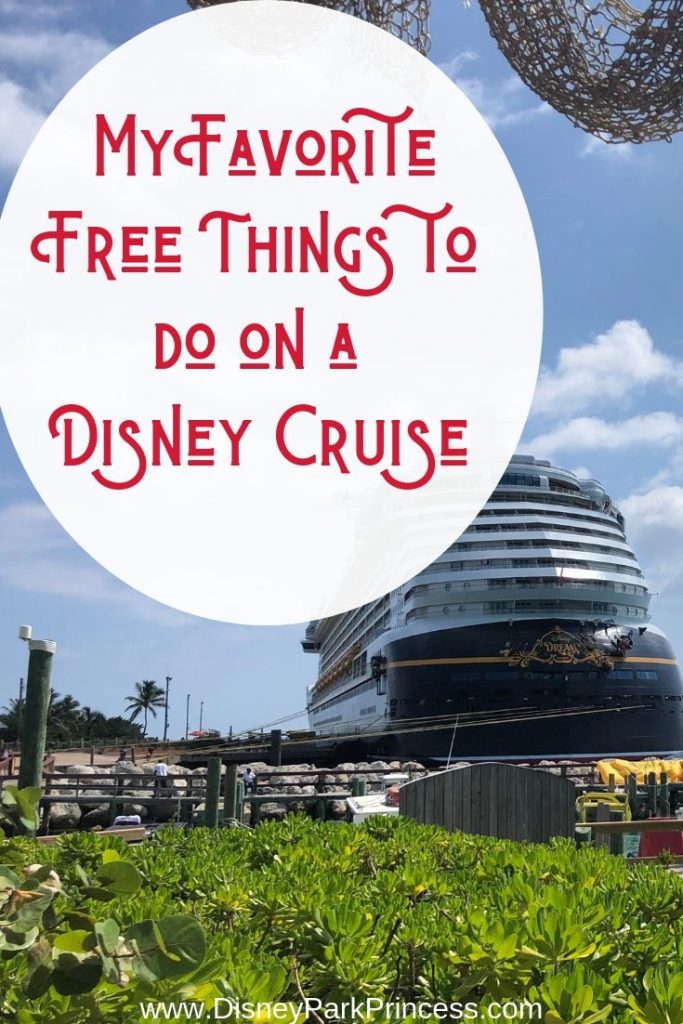