Why I love Tomorrowland at the Magic Kingdom 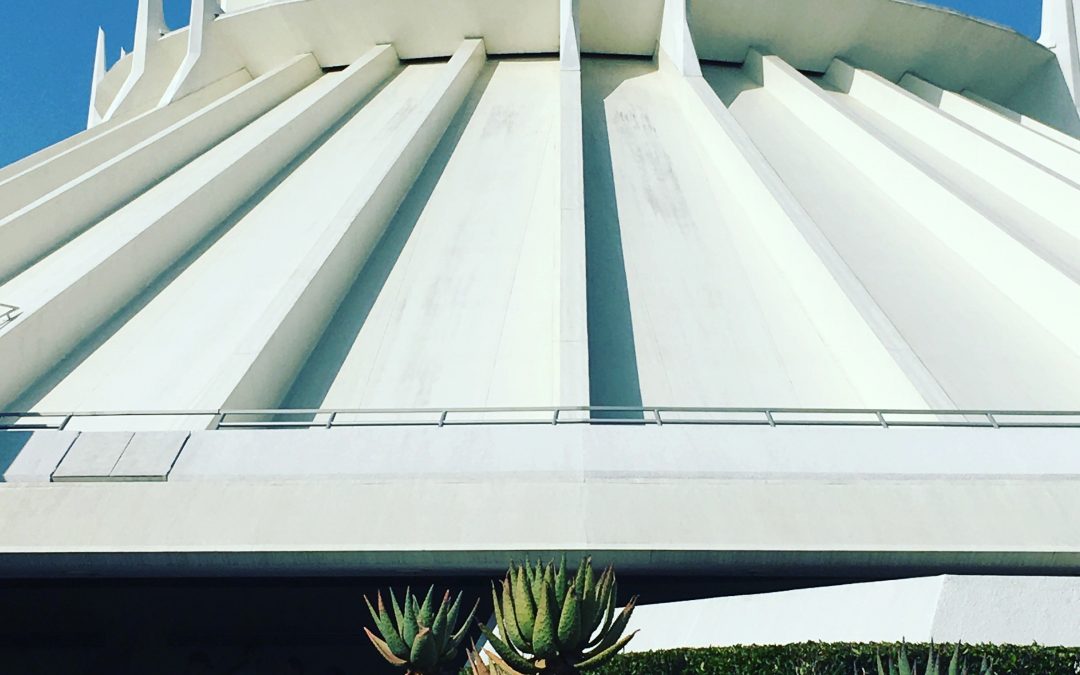 Boy, how I love Tomorrowland! It’s always fun to think about the future, but two of my favorite attractions in all of Walt Disney World are here (Carousel of Progress and Buzz Lightyear’s Space Ranger Spin). I love Buzz Lightyear because I’m competitive with myself to get the max score (yes I’ve done it many times!) and I love Carousel of Progress because I love anything that Walt had a hand in himself. 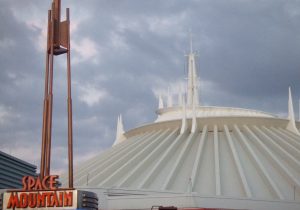 Space Mountain is one of the headline attractions in all of Walt Disney World. Since it opened in 1975, it has delighted millions of guests from around the world. Riders board a rocket ship and climb the 180 foot tall mountain through a space port. Then the coaster descends as it twists and turns through near pitch darkness to end up back on solid ground in the space lab.
Height Requirement: 44 inches
FastPass+ is available and recommended

Calling all Space Rangers! The evil emperor Zurg is at it again and Buzz Lightyear needs your help! Shoot Zurg’s symbols with the laser blaster that comes equipped in your vehicle, an XP-37 Space Cruiser. As you ride along, you can spin the vehicle around to get better aim on the Z’s. Try riding several times to try and improve your score.
FastPass+ is available 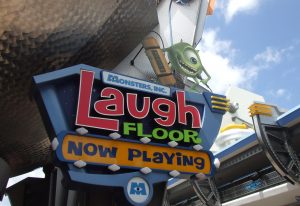 A comedy club of monster proportions is what lies inside the Monster’s Inc. Laugh Floor. Mike Wazowski is your emcee, and he’s joined by other monsters- all with the purpose of making the audience laugh and therefore harvesting their energy to help Monstropolis thrive. The best part is that you get to send in (via text message) your very own jokes and the monsters might even tell your joke during the show!
The show lasts about 15 minutes.
FastPass+ is available 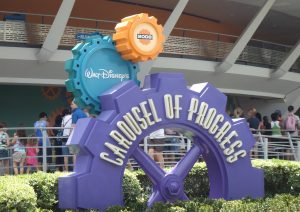 This rotating theater chronicles the life of a typical American family through the years. Your host is John, the family father, and he tells you about the new inventions and technologies that have come about in the past few years. John is joined by his wife, children, parents, and of course his dog Rover.
When Walt Disney’s Carousel of Progress was featured at the 1964 World’s Fair, it was a huge hit for Disney and now holds the record for the most performances of any stage show. Some people just pop in to get away from the crowds or the heat, but I visit on every trip because it’s such a powerful testament to Walt’s belief in progress and to “keep moving forward.”
The show lasts about 20 minutes.

The Tomorrowland Speedway is an attraction where you get to be in the driver’s seat! These natural gas-powered cars drive along a track and can go at speeds up to 7 mph. While this is not race car speed, it’s still a lot of fun! The Speedway makes several turns and goes under a small tunnel before coming back into the pit.
This attraction is quite popular, especially with children, so the queue can get rather long. There is also a grandstand available to for spectators who choose not to ride.
Height requirement to ride- 32 inches; Height requirement to drive alone- 54 inches
FastPass+ is available 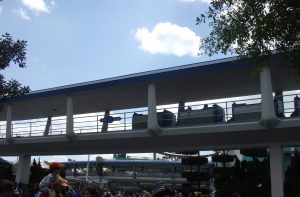 The TTA is your “blue line in the sky,” a nice, quiet ride through Tomorrowland. Board a tram and ride through Space Mountain, Buzz Lightyear’s Space Ranger Spin, and other areas to get a unique view of Tomorrowland. Along the way listen to the announcements as you’ll hear several clever puns (one asking you to beware of “forward-facing tentacles”) and see the “City of Tomorrow” model. It also offers a great view of Cinderella Castle.
The TTA is a great way to relax and get off your feet as the queue is not usually very long, but it does move quickly. 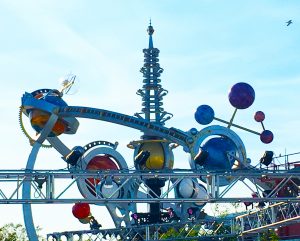 The Astro Orbiter is located high above Tomorrowland right in the middle of Rocket Tower Plaza. Riders board an elevator and ride up to the loading dock where they will then board their very own Rocket Ship, equipped with a lever to allow them to soar even higher as their rocket goes around and around the Plaza.
This attraction, like its sister attractions Dumbo and Magic Carpets, is popular among small children. Lines can get long and no FastPass+ is available, so try and ride early in the day. Use caution if you are afraid of heights.

There are a few restaurants in Tomorrowland, all are counter service restaurants or snack carts. The biggest issue with Tomorrowland restaurants is that there are very few breakfast options, so if you’re going to run to Space Mountain first thing in the morning you’ll have to go elsewhere if you want to eat breakfast in the park. The Lunching Pad has hot dogs, pretzels and slushies. Tomorrowland Terrace Restaurant has good food with burgers, chicken tenders, salads, but it’s only open seasonally, so your best bet for lunch or dinner in Tomorrowland is Cosmic Ray’s Starlight Café. Not only do they have good food, but there’s a really fun audioanimatronic named Sonny Eclipse who croons as you dine. This restaurant does get pretty busy during peak times, though, so try and eat early or late.

There you have it! I hope you’ve enjoyed my series on the Magic Kingdom attractions so far. I have already blogged on Frontierland and Adventureland, and my next in the series will be Fantasyland. Thanks for reading! 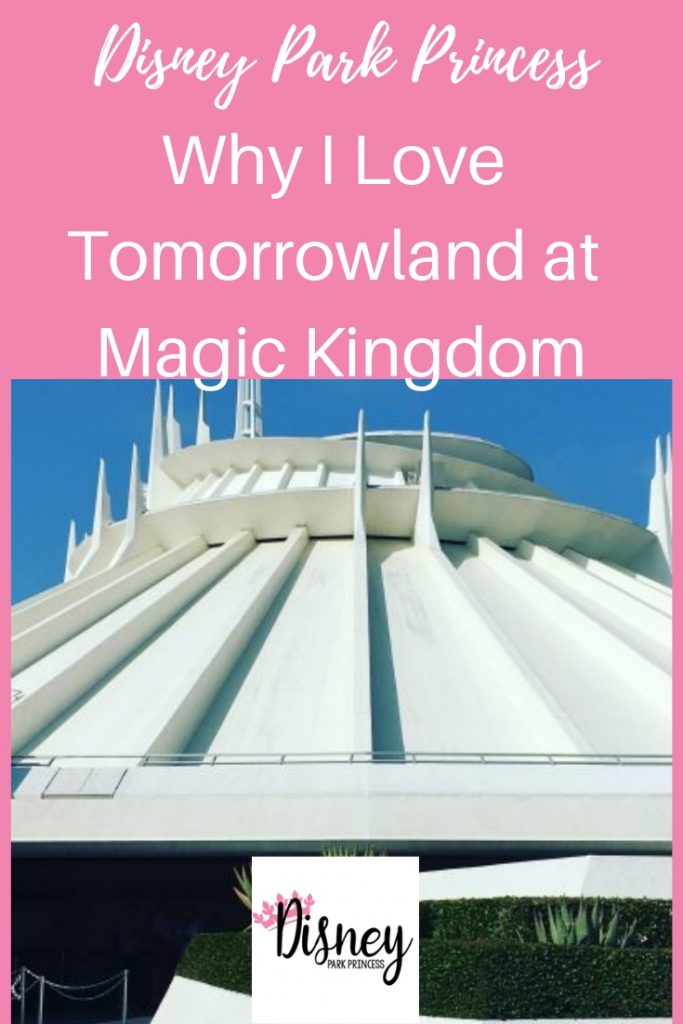