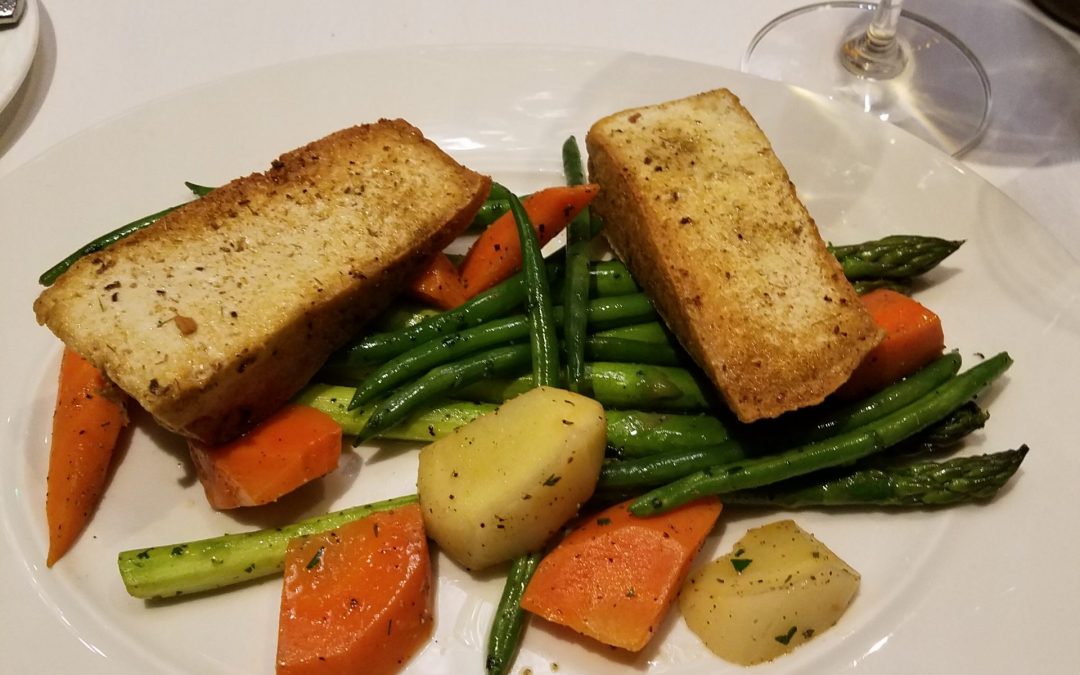 Eat Healthy at Walt Disney World?! I promise it is easier than you think! Read on to learn 5 ways to help you eat healthy while on vacation!

I recently wrote about how to work out on your vacation, so I figured I’d take it one step further and talk about how to eat healthy while you’re on your Walt Disney World vacation. I’m of two minds when it comes to this. The first is “I’m on vacation! Live and let live! Eat everything in sight!” The second is “Don’t blow it! You eat mostly healthy all the time, keep it up now!” Neither one is right or wrong, but I vacillate between the two mindsets leading up to and while on my trip.

Most of these tips will carry over for eating out while at home too! I personally do at least a few of these each time I eat in a restaurant at home, and it works just fine while at Walt Disney World. Remember, whether you have food allergies or special dietary needs or not you can always ask for a list of ingredients at any counter service or table service restaurant, or even speak with a chef. In many cases the chef can make recommendations based on your needs. And remember every restaurant now has at least one plant based option!

Here are just a few ways you can change up your meals to eat healthy options at Walt Disney World. But remember, you’re on vacation! It’s ok if you go off your “plan” sometimes- eat what you really want!

Most of the counter service restaurants at Walt Disney World have the option to order carrot sticks, grapes, or apples instead of French fries. Sometimes it’s even the default option, so even better! Most counter service restaurants will have these fruits and vegetables even if you don’t see an option on the menu. In fact, you can even get just the entrée or just the sides even if they are not on the menu!

One of the ways Walt Disney World helps the lines move quicker is to bundle items together to make meals much like many fast food restaurants. With that you can just go up and order a “number 1” or whatever your fancy! However, you don’t have to do this! If you just want the burger, or the grilled chicken, you can do that. If you only see cheeseburgers and you want a plain hamburger, that’s fine too! It’s your meal and you don’t have to settle for only what you see on the big board. You can always ask about healthy options to see what they have.

With the My Disney Experience app you can make things even easier on yourself by viewing menus ahead of time. You can even use mobile ordering, but this does make it harder to customize your meals. But at least you can have a little bit of a plan before you head in to your meal.

What you may not know is that everyone can order a kid’s meal (if you’re not using a dining plan). Many times kid’s meals have smaller portions and they automatically include fruit and vegetables. In addition to being cheaper in general, they almost always include a soft drink or small bottle of water so you don’t have to worry about that too. For example, at the Backlot Express at Disney’s Hollywood Studios, you can get an adult entrée of four chicken fingers with fries for $9.99 (no drink). Or, you can get a kid’s meal with two chicken fingers, a yogurt smoothie, carrot sticks and small drink for $7.19. Yes, it’s less food, but it’s definitely healthier!

If you see a yellow Mickey with a check mark- that’s the symbol that notes the meal meets Disney’s nutrition guidelines. These will only be on some kid’s meals but if you see it you’ll know it’s at least somewhat healthy and balanced. 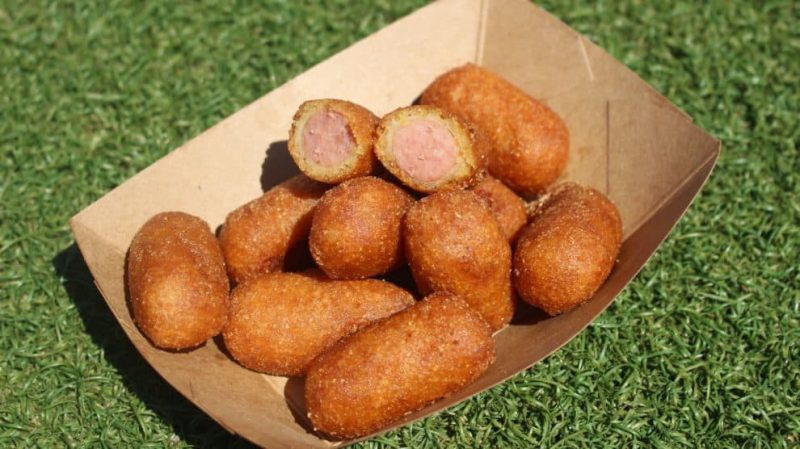 Corn Dog Nuggets from Casey’s Corner- not really healthy but we skipped the fries to make it better!

Many of the table service and fine dining restaurants at Walt Disney World say they come with a set plate. For example, at The Wave, one of the entrees is “Grilled Beef Tenderloin with sides of Potato Gratin, Seasonal Vegetables, Peppadew Vinaigrette”. Don’t like it? No problem! You can substitute a baked potato if they have one, or a side of rice or something else. You can ask for no butter on the vegetables. Get the vinaigrette on the side.

Just because it’s on the menu as a pairing doesn’t mean you have to pair it yourself. These are merely suggestions. If you don’t like a side, or you love all of the sides but want a different entrée, just ask! 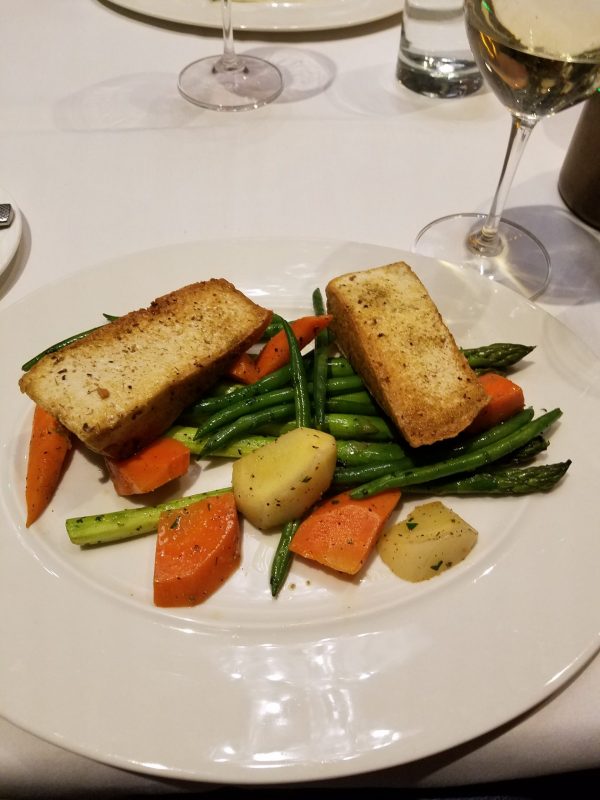 You’re definitely allowed to share meals! If you and your travel party can agree on what to order, then by all means share! Your server will bring an extra plate or two. You can also ask for a to go box- all rooms at Walt Disney World have fridges, and many rooms have microwaves, and if they don’t in most cases the food court area does! Or eat your leftovers cold for breakfast for a fun adventure!

If you’re at a buffet, you don’t have to go back six times! Just pick what you want and eat it. A lot of times I feel like I have to “get my money’s worth” out of a buffet, but I really don’t have to gorge myself in order to do that. The buffets at Walt Disney World are mostly character meals so that’s really what you’re paying for.

Don’t forget if you share you meal to still tip your server accordingly!

Skip the Appetizer, Eat the Dessert!

Don’t forget dessert! I would rather eat dessert than an appetizer, so if I know I’ll be full from my meal yet I know I’ll want dessert, I will not get an appetizer. Many fine dining restaurants don’t have desserts on the main menu, so it’s ok to go ahead and ask to see a dessert menu before you order to see if you’ll like that better. You don’t want to get overly full before the best part!

When I’m at Walt Disney World I do try and limit myself to one sweet treat per day, whether that’s dessert at a meal or a snack somewhere in the park so I at least plan that ahead of time. And while I do love a Mickey bar, if I know I’m going to Beaches and Cream later, I’d rather have that than the Mickey bar!

This might be one of those “do as I say, not as I do” posts, because there are definitely times I don’t make the best eating choices when on vacation, but hopefully these guidelines can help you in some way! Bon Appetit!